What is The Shubert Foundation: The nation’s largest private foundation dedicated to providing unrestricted funding for performing arts organizations.

Why it is important: Aside from its size and the number of theatres it supports, The Shubert Foundation is especially interested in supporting theatres that develop and produce new American plays.

Green Light Productions looked at each of the 349 theatres that were named as grant recipients in 2014. We examined their most recently announced season and looked at how many full productions (12 or more consecutive performances) were being produced of plays written by women. 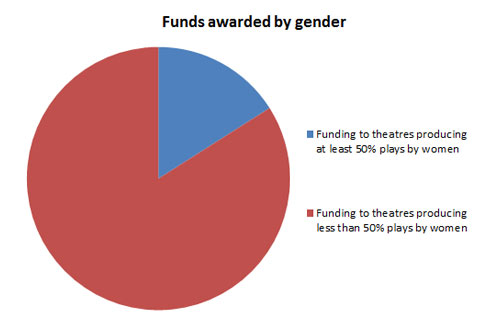 Theatre has an extremely important role in our culture. From the beginning of civilization it has connected people both physically and mentally from classic Greek tragedy to theatre of the absurd and everything in between. It is a medium that constantly evolves to mirror, reveal and expose modern society.

In the United States, nonprofit theatres are a unique business model. For most theatres, at least 50% of their revenue is contributed foundation, corporate, government and individual support. Foundations, especially those as large as The Shubert Foundation, play an important role in sustaining American theatre.

There is no doubt that The Shubert Foundation is dedicated to supporting American theatre, however if they would like to cultivate the next generation of theatre, if they are committed to an American theatre that is both vibrant and successful, they will challenge theatres to produce plays written by women. They will encourage theatres to embrace the range and capacity of women playwrights and financially reward those that do, essentially giving theatres the confidence to produce theatre that creates the much needed audiences that American theatre needs to survive.

Women write great plays. We hope The Shubert Foundation will empower theatres in America to produce them.

Do we really need this?

I started Green Light Productions in 2003 to create new opportunities for women in theatre. As of 2008, Green Light exclusively produced plays written and directed by women.

This year, Green Light completed The Shubert Report to examine the 349 theatres that received $16.4 million in grants last year from the nation’s largest private funder of the performing arts. We found that only 26% of the plays being produced were written by women and that 125 of those 349 theatres weren’t producing ANY plays written by women. Foundations, especially those as large as The Shubert Foundation, play a huge role in sustaining American Theatre- most of which is classified as nonprofit. Imagine the impact it’d have if they required applicants to produce seasons that had 50% female writers and directors? Imagine the impact if just one major theatre a year decided to do a season of plays by women. Just that one step…

In 2005, I took that step. Heather Jones sent me her one-act play “Last Rites” about a life-long friendship between two women. It’s a beautiful play and I walked around with Heather’s script in my bag for month thinking about how it could be produced. I had the idea to create a festival of one-act plays all written and directed by women. GLO- Green Light One-Acts. And since the first GLO in, we’ve given world premieres to 15 one-act plays with productions in Philadelphia, New York and now- Los Angeles.

In GLO2014 we introduce to the world 4 new plays- written by female playwrights based in Los Angeles including Allie Costa, Jennie Webb, Julianne Homokay and myself with directors Liz Hinlein, Jen Bloom, Ricka Fisher and Katherine James. I have met the most incredible women just working on this first Green Light show here and I am so excited to plan our next steps here in LA.

Getting here wasn’t easy. While I’ve had the absolute pleasure to work with hundreds of women who support our mission, over the years I heard a surprising amount of negative feedback – much of it from women who felt that the theatre didn’t need companies like Green Light. A female journalist actually responded to one of my press releases with “Do we really need this?”

I hope that by forming new collaborations, asking lots questions, challenging those who need to be challenged and producing work by women, Green Light will continue to have a valuable impact on artists and audiences. And I hope you’ll be part of it.

Check out the short film I wrote and directed for the Project Green Light competition. "Cat Therapist" also stars Sean Faye (who coincidentally was in the first production of GLO back in 2006) and Xander the cat.

Ben Affleck said "Project Greenlight was ahead of its time." I feel the same way about Green Light Productions. Over the last 11 years people have said that this work of creating opportunities for women wasn't necessary. Obviously they were dead wrong and the current activity by groups like The Kilroys and our own Shubert Report have shed a huge spotlight on the importance of companies like Green Light.

Just one week left until submissions close for GLO 2014. We've gotten such a great response from Los Angeles based playwrights and directors- we might just have to do this 2x in 2015.

One side of me knew the co-op wouldn’t stand up and do something radical like pull Eden Foods off their shelves but another part of me wished they would because they’re not just another soulless company assuming the rights of an individual but accepting none of the responsibility that goes with it.

My e-mail to Whol Foods Market

I am sure you know that CEO of Eden Foods Incorporated, Michael Potter, sued the Department of Health and Human Services on the grounds that the Affordable Care Act's contraceptive mandate violated his right to religious freedom. The U.S. Court of Appeals decided against Mr. Potter, ruling that as a for-profit corporation Eden Foods could not "exercise religion."

Due to the Hobby Lobby decision, Mr. Potter's case has been sent back to the U.S Court of Appeals.

You can read quotes from Mr. Potter on why he has brought forth this suit here.

I ask that you remove products manufactured by Eden Foods from your shelves. Michael Potter has used his religious freedom to deny the rights of his employees and it is in the best interest of your company and your customers that we do not support Eden Foods.

Thank you for contacting Whole Foods Market to share your feelings about Eden Foods with us. When reviewing products for our shelves, our primary consideration is whether the product’s ingredients meet our Quality Standards. We recognize that customers may have their own personal criteria for buying or not buying a product, and it’s every shoppers’ right to vote with their dollars on that basis. We hope that if you have any feedback for Eden Foods, you’ll share it with them directly. Please know that we appreciate your feedback, and support of WholeFoods Market.

If you have any further questions please use our on-line response form.